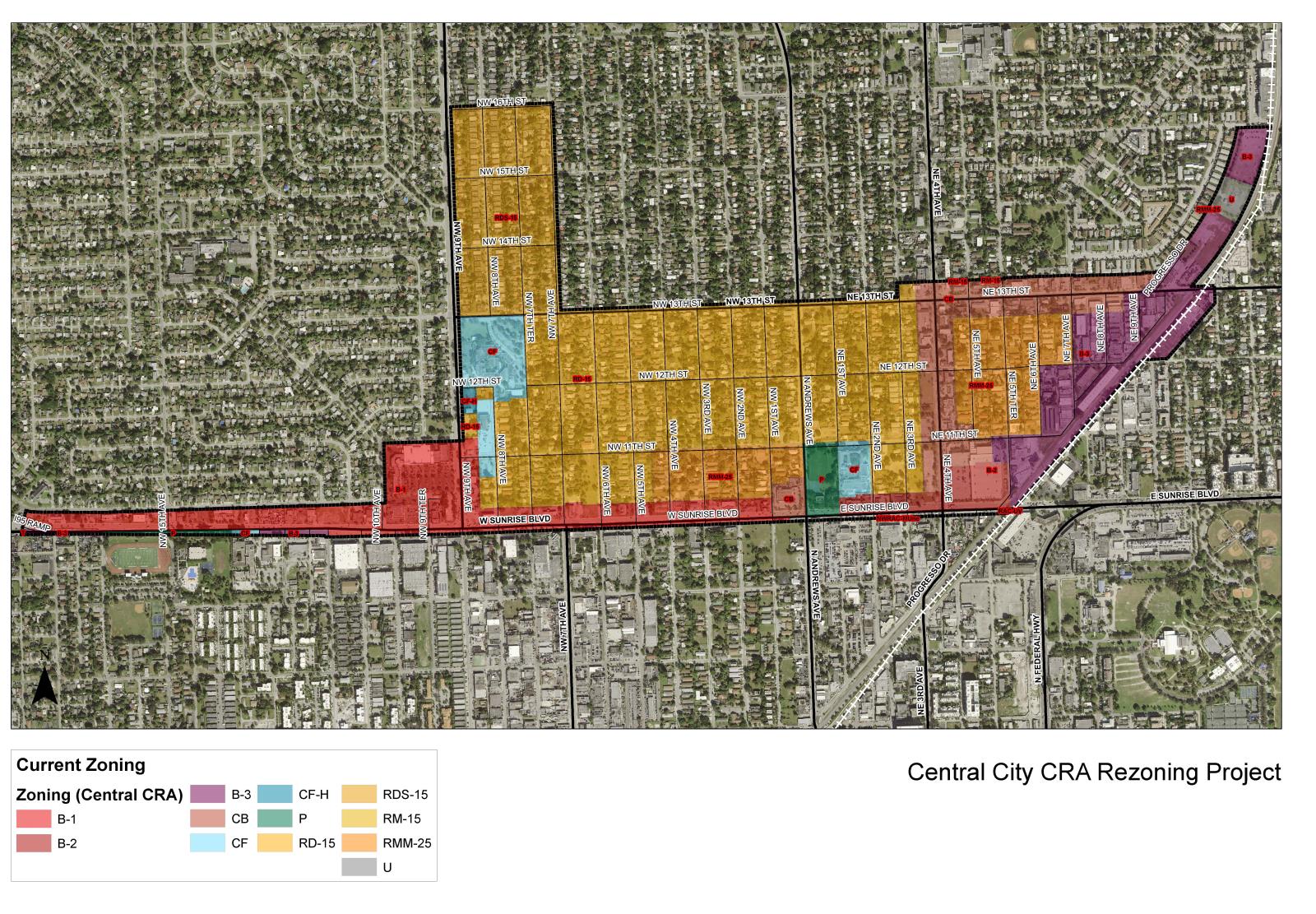 The Central City CRA is a 344-acre area bounded by 13th and 16th Streets to the north, Sunrise Boulevard on the south, on the east by FEC Railroad right of way, and on the west by Powerline Road and I-95. In the growth surge during two decades after World War II, the CRA neighborhoods were developed as single-family one-story bungalows. In the 1970's, rezoning allowed the infiltration of duplexes and small multi-family units, which caused a transition from higher percentages of owner-occupied properties to a high proportion of rental property. This resulted in a decline in the maintenance and upkeep of homes throughout the CRA. In the early 2000's, this decline in property values increased interest in the area as a lower-priced alternative to the rapid escalating housing prices in newer suburban areas, and as a location convenient to highways and amenities in nearby areas. However, with the 2007 housing crisis, redevelopment activity declined and has by in large ceased. Most commercial buildings were built in the 1950s and 1960 concurrent with the residential development. Pease click here to see a zoning map of Central City CRA.

Strengths and weaknesses with the redevelopment area are identified as follows.

Single use zoning restricts the mixing of uses — which can be useful for preventing the mixing of incompatible uses, such as a landfill and residential development. However, mixed use zoning districts can be helpful because they allow supporting uses, such as residential and neighborhood retail, in close proximity. This reduces the need for car trips, and provides retailers with customers and customers with convenience goods and services in a mutually supportive environment.  While the existing regulations in the CRA allow for mixed uses, they are cumbersome and difficult to implement. With the wide range of uses in the CRA and diversity of neighborhood character, mixed use regulations will make it easier for the redevelopment area to take advantage of growth opportunities and attract desirable development.

The Consultant will work with Staff to evaluate regulations governing the areas proposed for mixed-use development and determine whether a land use amendment to the Comprehensive Plan or an amendment to the City of Fort Lauderdale Unified Land Development Regulations (ULDR) — or amendments or both — will best facilitate mixed-use development in the CRA. A Comprehensive Plan is adopted by municipal governments, pursuant to the requirements of Florida Statute 163.3177. It establishes the official land use goals, objectives, and policies based on an inventory and analysis of data related to future land use, housing, transportation, intergovernmental coordination, capital improvements, open space and recreation, conservation, and public facilities. Zoning, as adopted in the ULDRs, is the regulating mechanism to implement the goals, objectives and policies of the comprehensive plan. The State of Florida requires that municipalities adopt or amend land development regulation to be consistent with the adopted comprehensive plan (F.S. 162.3201).

The Entire project is envisioned to be completed within 17-18 months of the project kick-off meeting. The major project tasks are:

Consultant will conduct a technical analysis of all planning documents and studies related to the CRA, zoning regulations, and the comprehensive plan to understand how they help or hinder redevelopment in the CRA.

Consultant will prepare a Land Use Plan Amendment or an outline of New Mixed Use Zoning Classifications.

Consultant will finalize the code ordinance and prepare the legislation for adoption by the City Commission.