The need for the City of Fort Lauderdale's first fire department became apparent in 1912 as the result of a disastrous fire in the City's downtown district that destroyed nearly everything between Wall Street and New River on both sides of Brickell Avenue (now SW 1st Avenue). The town had just been incorporated in 1911 and following the fire the City Council voted to purchase its first fire equipment. About the same time, the City also formed its first volunteer fire department. The department did not have a permanent home until 1913, when the first fire station was built at Andrews Avenue and SW 2nd Street. The first paid fire chief started in 1917 at a salary of $25 per month

From these humble beginnings, the Fort Lauderdale Fire Rescue Department has grown into an organization of more than 450 individuals working from 11 stations located strategically throughout the City. The department uses the most modern fire rescue equipment and techniques to deliver fire and emergency medical services to the residents and visitors of Fort Lauderdale.

Since 1912, there have been many changes in personnel, equipment, techniques and station locations. Some of the highlights include (stations are referenced using their current/modern number designations):

1920's - The City's first paid firefighter starts working at a salary of $150 per month for 24 hours a day, seven days a week. The department's first ladder truck is purchased. The original Station 3 is built in 1925, followed by Station 8 in 1927.

1930's - Fort Lauderdale is given an honorable mention in fire prevention from the National Board of Fire Underwriters.

1980's - The Firefighter's Insurance Trust Fund is established and the Fort Lauderdale Fire Department is 100 percent unionized. In 1985, Station 3 moves to its current location on SW 4th Avenue and Station 88 opens on NW 21st Avenue. 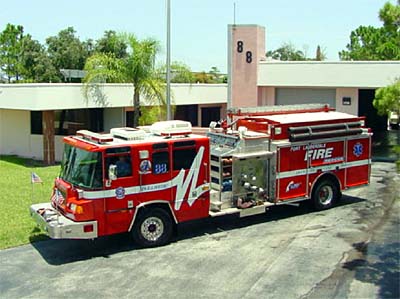 2000's - On March 1, 2000, the first female was promoted to hold the title of Deputy FireChief in the history of the City.  On September 11, 2001, within hours of the terrorist attacks, six Fort Lauderdale firefighters leave for New York with a 72-member team to assist with the rescue efforts at Ground Zero. That same year, ground is broken at 528 NW Second Street for a new combined Fire-Rescue station and administration building.  In 2004, voters approved a $40 million bond issue to build, renovate and upgrade 10 fire stations. Plans aimed to hardened fire stations to hurricane forces, further reduce response times and accommodate population growth.  In 2009, the City’s Fire Rescue Department responded to 41,000 incidents. Operational enhancements included opening Fire Stations 3, 29, and 49.

2010's- Firehouse 49 opened in 2010 as the 5th station built within the scope of the fire bond funds .This station houses Engine 49, Ladder 49 and Rescue 49 as well as the Marine Team and both fireboats.  In 2012 the new Firehouse 35 opened its doors on the site of the original Firehouse.  In 2013 Fire Chief Robert F. Hoecherl was appointed Fort Lauderdale’s twenty fourth Fire Chief and was promoted from within the fire department.  In 2013 Firehouse 46 was relocated and built next to Mills Pond Park at 1515 NE 19 street. This firehouse houses Engine 46, Rescue 46, and Rescue 246.  In 1996 Engine 46 was named as ”the busiest engine company in the State.”  In 2014, Fort Lauderdale Fire rescue, under the leadership of Fire Chief Robert Hoecherl, began the Accreditation process and Fire Rescue moved to the Regional Broward County 9-1-1 dispatch center.  In 2015 achieved CFAI Accreditation Status.  In 2018 appointed its first female Fire Chief and achieved CAAS Accreditation Status. Progress on other stations continues to move forward as follows: 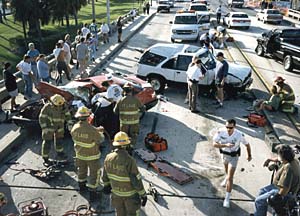 The Future - Building on a legacy of 106 years of service, the future is bright for the men and women of Fort Lauderdale Fire Rescue and the people we serve. Strong leadership, dedicated personnel, persistent training, state-of-the-art technology and upgraded facilities are key to saving lives and protecting property for this generation and generations to come.