The Fort Lauderdale Fire Rescue Hazardous Materials Response Team (Hazmat Team, or HMRT) was founded in 1979 and was the first fire department hazardous materials response team in Broward County. The Hazmat Team has been extensively trained and equipped to respond to the threat and/or deployment of nuclear, radiological, chemical, or biological weapons of mass destruction (WMD).

The Hazmat Team is operational 24 hours a day, seven days a week and is one of four regionally posted Hazmat teams. The Team not only responds to incidents within the City of Fort Lauderdale and within Broward County, but also has the equipment, training, and capabilities to respond State-wide. A minimum of five Hazmat Technicians are on duty at all times. Based on the size and scope of an incident, additional Technicians from around the City may be requested to respond as needed. 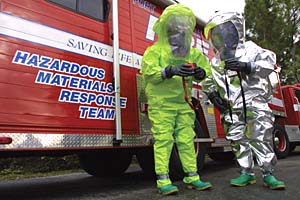 The Hazmat Team also works with several local, regional and federal agencies to develop protocols for different types of hazardous material emergencies. These multi-agency partnerships have been strengthened to foster interagency knowledge, as well as to develop an understanding of what each agency's role is in an emergency situation.

The Hazmat team is outfitted with a tractor-trailer to store and transport the various pieces of equipment and protective gear necessary for hazardous materials emergencies. The Medical Rescue Unit assigned to the Hazmat Team is equipped with advanced technology, such as a Forward Looking Infrared Camera (FLIR), multiple multi-gas monitors, and radiation detection technology both inside and outside the unit.

The Fort Lauderdale Fire Rescue has the capability and equipment to decontaminate, treat and transport victims of chemical or biological exposure.  When not responding to or training for hazardous materials emergencies, the members of the Hazmat team staff an Advanced Life Support (ALS) equipped engine company and respond to standard fire and medical emergencies.