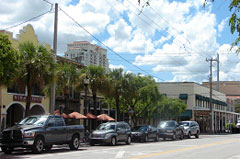 According to the City of Fort Lauderdale’s historic preservation ordinance or code, the criteria for the designation of a local landmark or district must be based on one or more of the following criteria:

The building, site, structure or group of buildings has significant architectural or aesthetic significance if it has the following attributes:

Utilize the Historic Designation Application and follow instructions outlined to apply for the historic designation of an individual structure or district. Designation applications may be initiated by a motion of the Historic Preservation Board, a resolution of the City Commission, the property owner(s), or a non-profit organization with a recognized interest in historic preservation.