On January 21, 2015, the City of Fort Lauderdale City Commission adopted an ordinance creating the Northwest Regional Activity Center (NWRAC) Master Plan, which encompasses the creation of the NWRAC Mixed-Use (NWRAC-MU) Zoning Districts, adopted on February 17, 2015, along with associated Zoning Regulations and the NWRAC Illustrations of Design Standards that will set the standard and allow for certainty for future development within the NWRAC Master Plan area.

The fundamental planning principles identified in the plan and summarized below help guide the framework for the NWRAC Master Plan:

It should be acknowledged that the subsequent chapters in the NWRAC Illustrations of Design Standards document predominately address those portions of the study area as identified in the NWRAC Master Plan, corresponding with the new NWRAC zoning districts. 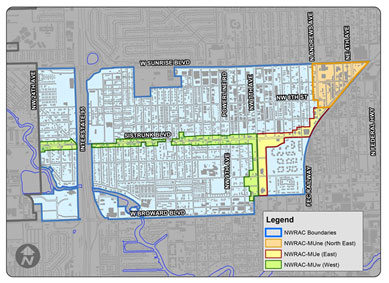 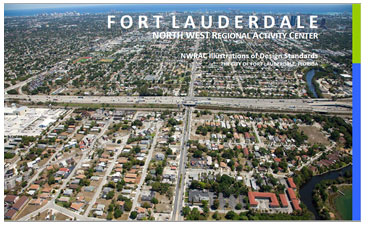 or go online to the Unified and Land Development Regulations (ULDR).

This project was started in 1995 with the establishment of the Community Redevelopment Agency (CRA) and further in 2001 when the community expressed desire for public and private improvements in the area. The Northwest-Progresso-Flagler Heights (NPF) CRA also referred to as NW-CRA, is generally bounded by Sunrise Boulevard to the north, Broward Boulevard to the south, Federal Highway to the east, and it’s western boundary is approximately four blocks west of I-95.  The CRA hired consultants to develop a study of the area, and as a result, the 2006 Sistrunk Boulevard Urban Design Improvement Plan and 2008 Northwest Progresso-Flagler Heights Community Redevelopment Agency (NPF-CRA) Implementation Plan were subsequently drafted.  In 2013, City staff was tasked with creating the NWRAC Master Plan using previous plans as the basis for developing Design Standards and Zoning Regulations with the intent to allow a mix of uses along the Sistrunk Corridor and 7th Avenue within the NWRAC.  Through a comprehensive public planning process that included input from stakeholders, public outreach and design charrettes that were held from proposed plans, a vision was developed for the area.

The rezoning of these corridors will allow the area to redevelop from a relatively under-utilized resource to a bicycle and pedestrian-friendly urban corridor that offers a mix of uses to serve nearby neighborhoods and bring the corridor back to the vibrant and thriving business, shopping, cultural and entertainment area that it once was.