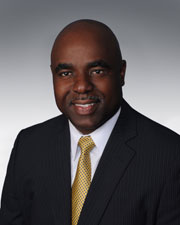 Robert L. McKinzie was sworn in as City Commissioner for District III on November 10, 2014 to serve out the remainder of the term vacated by former Commissioner Bobby B. DuBose.  On February 10, 2015, he was elected District 3 Commissioner, capturing nearly 60 percent of the vote in a three-way race. He was re-elected to a second full term on the City Commission in January 2018 after winning the primary with more than 50 percent of the vote in another three-way race.

Commissioner McKinzie has championed numerous high-profile projects including the development of a new $15 million L.A. Lee YMCA/Mizell Center, Brics ‘N Stics co-working space, Smitty’s Wings restaurant, and construction of new single-family homes in the River Gardens/Sweeting Estates neighborhood. He continues to foster community engagement through family-friendly special events and entertainment options including a series of free concerts at Carter, Provident, and Riverland parks. To preserve and expand green space, Commissioner McKinzie advocated for passage of a $200 million bond that will bring significant upgrades and improvements to City parks, including construction of a signature community center at Carter Park and numerous enhancements to other parks throughout District III.

A proponent of giving back to the community, Commissioner McKinzie’s extensive fundraising efforts through Sistrunk, Inc., have provided local students with more than $100,000 in scholarships to further their education at colleges and universities.

With an extensive background in business and finance, Commissioner McKinzie has served in numerous leadership and management positions throughout his career.  For nearly two decades, he has been owner and president of Harper and Sons Construction, a general contracting firm that specializes in affordable housing and construction management.

A native of Fort Lauderdale, Commissioner McKinzie is a proud graduate of St. Thomas Aquinas High School.  He holds a Bachelor of Science degree in Business Administration from Bethune-Cookman University and is a member of the Omega Psi Phi Fraternity, Inc.