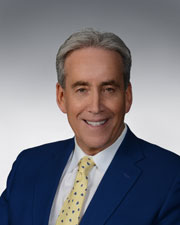 Steven Glassman was sworn in to his first term as commissioner of District 2 on March 20, 2018.  Commissioner Glassman also currently serves as Fort Lauderdale’s Vice Mayor.

Steve was born in New York City in 1953 and grew up on Long Island.  After receiving a Bachelor’s and a Master’s Degree, he settled in Buffalo, New York where he was an educator for eighteen years.  Steve and his spouse of forty-seven years, Rande, moved to the area in 1994 and they have lived in District 2 for over 20 years; Steve is rooted in the community through both his professional and personal life. For eleven years, Steve was an administrator for the Broward County Cultural Division where he worked closely with elected officials and business leaders to further the quality of life in all of Broward's major cities through the arts and culture. This work included serving on Advisory Boards in Hollywood, Miramar, and Pembroke Pines.

Closer to home, Steve has served on the City of Fort Lauderdale's Beach Redevelopment Advisory Board (three years) and the Planning and Zoning Board (six years) where he grew to understand the importance of building consensus and working as a team to get things done.  Over his many years in various civic leadership positions, including President of the Broward Trust for Historic Preservation, Steve has come to understand how vital Neighborhood Associations are in our City’s civic and economic development. This understanding was driven home time and time again in Steve's seven-year tenure as the President of the Central Beach Alliance where he worked in close partnership with many of the City's most prominent neighborhood and business leaders. Steve has also served as President of several beach condominium associations including his current eight-year tenure at the Sapphire Condominium.

Steve’s run for City Commission was a victory of people over politics.  It was an honest, straightforward campaign about fixing our infrastructure, real solutions for traffic, and smart growth that proactively plans for the future.  Steve is so very excited to get to work on these issues and more to ensure that everyone’s quality of life is sustainable and that the integrity of each and every neighborhood is protected. Fort Lauderdale is a tremendous place to call home; Steve loves this City and feels it is an honor to serve.

Commissioner Glassman may be reached via e-mail at SGlassman@fortlauderdale.gov.

Commissioner Glassman's assistant, Pratima Raju, may be reached via e-mail at PRaju@fortlauderdale.gov.